Nature’s fury, as they call it, describes any act of nature with a lot of power and the capacity to destroy property and threaten lives. Earthquakes, for example, may shudder the ground and rattle buildings, while a volcanic eruption may vaporize the landscape (and a town) with lava flows. Storms such as blizzards, hurricanes, and tornadoes can also prove problematic, to say the least, but meteorologists are always hard at work studying and tracking these storms. With a better understanding of tornadoes and hurricanes, evacuation efforts can be made effectively, and that can save many lives.

Meanwhile, buildings cannot be evacuated along with their owners, but they can be designed to endure storms without falling apart. Many buildings along California’s San Andreas fault line have specialize internal structures and foundations to endure earthquakes, and in flood prone areas, one may find levees to contain floods and elevated foundations on buildings. Along the American east coast, meanwhile, anti-flood measures ma be joined by hurricane sliding doors and hurricane glass windows to block strong winds and rain from getting into buildings. Choosing hurricane proof windows is essential during construction of a condo or apartment, for example, can help prevent a lot of property damage in the future. High impact windows and doors can be supplied from the right manufacturers, and hurricane sliding doors will keep a building’s interior safe from winds and debris.

Hurricanes form over oceans and often move over land before they dissipate, and many of them strike North America and the Caribbean each year. Records show that in the 20th century, a total of 158 different hurricanes struck the continental U.S., and the state of Florida alone was hit with 57 of them. Even smaller hurricanes may boast strong winds and flood waters, and they can destroy a lot of property during their lifetime. Such hurricanes are also known to create tornadoes, as Hurricane Andrew did in 1992 (it created 62 tornadoes).

Many meteorologists and other experts have reported that hurricanes are becoming even more frequent and powerful now in the 21st century, and many attribute that change to climate change and a warming of the world’s oceans. At the very least, the year 2017 saw incredible levels of hurricane activity. In that year alone, 10 different storms in a row formed into fully formed hurricanes, and this remarkable feat has not been seen since 1893, over a century earlier. And Hurricane Irma also formed in that year, the single most powerful Atlantic hurricane on record. This massive storm had seven trillion watts of energy and featured 185 MPH winds, and before Hurricane Irma dissipated, it had destroyed or damaged 90% of the buildings on Barbuda. It is possible that storms of this staggering magnitude may arrive again in the near future, so meteorologists and engineers alike are getting ready for them. This often means installing hurricane sliding doors and windows to prevent interior property damage.

The Right Hardware for the Job

While a levee will help block rising flood waters, hurricane sliding doors and windows will block winds and debris from getting inside buildings, especially tall ones. After all, any building’s windows and sliding glass doors may be a weak point during a hurricane or tornado, but it is not an option to simply omit the windows during construction. Instead, construction crews will buy high impact windows and sliding glass doors from specialized manufacturers and install them. And when someone buys an older building in Miami, for example, they may check the windows and doors to see if they’re up to standard. If not, contractors can be hired to fit in new windows and doors that meet modern standards of hurricane safety.

These specialized hurricane sliding doors and windows may feature tough frames to help endure hurricane winds, and the glass itself is made of a specialized glaze. Glass with a glaze system of +105/-130 will endure hurricane winds in excess of 100 MPH, and this protects any building’s interior from the shards of a broken window. These windows also prevent rain water, winds, and wind-blown debris from getting inside the building. In fact, up to a point, flying debris may simply bounce right off those windows during a storm. 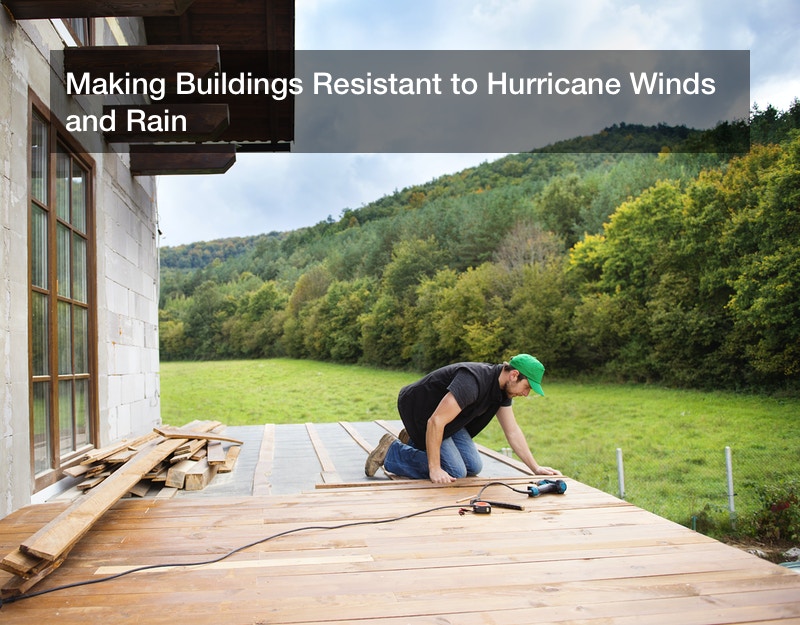